Back to Members' Stories Home Page

My story begins in 1953 when I was five years old. I had a brother who was almost six years older, and our parents were desperately worried. Polio was sweeping across a large part of the world, leaving thousands of people paralysed or worse. The vaccine developed by Jonas Salk was about to become the game-changer in the fight against polio, but in 1953 it was only available from a handful of private providers at a cost about $100 a shot. Luckily, our family had the financial means, and my brother, David and I were vaccinated. 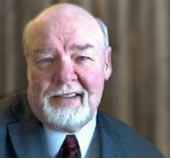 My mother had been stricken with polio as a young girl, when it was still called infantile paralysis. She made a full recovery, but as I'll detail later, the disease made a strong 'comeback' in her later life. Perhaps it was her heightened awareness that prepared her for protecting her two boys. Mother was firmly convinced that both of us had been exposed to the virus before we were vaccinated. In the years that followed, she swore that we avoided the dire consequences because she dosed us heavily with castor oil no less. We'll never know for sure, but it's one of many reasons that I'm thankful to have been blessed with such wonderful parents.

Life moved on and further vaccinations took place during my school years, including the Sabin vaccine that was taken orally. I enjoyed a healthy adolescence with no physical limitations. In high school, I was a starting lineman at Kelvin who was Manitoba high school football champions in 1964.

Back to mother's experience, in her late 60's she developed significant mobility issues, including some debilitating pain in both legs. By her late 70's, she was using a walker inside her home and I pushed her in a wheelchair when she went out. Several different doctors came up with different diagnoses. Only one that I can recall referenced the possibility that her difficulty was Post-Polio Syndrome. Mom died in 1995, one month shy of her 83rd birthday. By then, she had been taking morphine sulphate for the pain in her legs. Eventually, she was carefully weaned off that strongly addictive prescription, and she experienced some symptoms of narcotic withdrawal. The Post-Polio diagnosis was never followed up by anyone .

About five years after mom's death, when I was in my early 50's, my legs began to give me trouble. In the 15 years since then, there has been a gradual deterioration of mobility, although not much in the way of debilitating pain. For a long time, I thought it was primarily knee joints that were failing. Shortly before my 60th birthday, I had both knees 'scoped'. It's minor arthroscopic surgery that cleans out bone chips and other debris in the joint. It afforded some relief, and by then I was seen as a good candidate for bilateral knee replacement. In 2013, when I was 65, I had the left knee replaced at Grace Hospital in Winnipeg. In retrospect, I really wished that I hadn't bothered.

The left knee joint is not any worse, but it also is not significantly better. I still struggle climbing stairs, and I still don't suffer terrible pain in the joint. I don't believe that surgery was the answer for me, and I won't be getting the right knee done.

Within the past year, my wife and I have been aquasizing three times a week at North Centennial Pool in Winnipeg. We both find it wonderfully relaxing to be able to exercise in water, but it has also coincided with a new round of leg problems for me. My hamstrings and glute muscles are frequently stiff and sore. At times I must rely heavily on a cane to get around, and it definitely seems to be worse in cold weather. The legs seem generally weak, although the knees don't pose any particular problem at all.

Especially since being a guest speaker at a meeting last year of the Post-Polio Network and chatting with a number of people, I can't help wondering if this is indeed the source of my difficulties.

Roger Currie is a Winnipeg writer and broadcaster. He is heard regularly on CJNU, 93.7 FM, where he serves as news director.